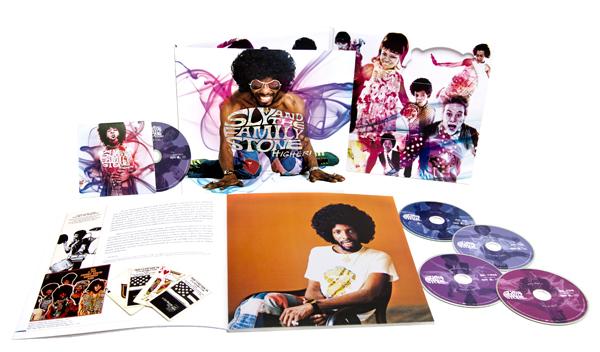 Positive reviews keep coming in for Higher!, the Sly & The Family Stone 4-CD box set released in August. Check them out below!

The highlights burn as brightly as ever: the hot-streak of singles — “Everyday People,” “Hot Fun in the Summertime,” “Everybody Is a Star,” and especially “Thank You (Falettinme Be Mice Elf Agin),” arguably the funkiest song ever conceived — are repped here with punchy single mixes and/or edits. The other great gets are 20 or so minutes from the band’s performance at the Isle of Wight festival in 1970, along with an unreleased 1973 live take of “You’re the One” (a single for side-project Little Sister, performed here by the full Family). Higher! is not the place to first meet Sly & The Family Stone — the two-disc Essential serves that purpose — but it’s a solid last-stones-unturned catch-all. – SPIN

The 104-page book rivals the set’s fantastic music, which sounds top-notch thanks to Vic Anesini, as a true marvel. Including photos of studio documents, the band performing live, and in-studio, press clippings, label scans, and so much more, as well as an introductory essay by Jeff Kaliss who has written a book on the group, and track-by-track annotations, it’s as nice of a collection of memories as one can imagine. – Wax Poetics

The exhilarating Sly & The Family Stone retrospective Higher! is a perfect argument for the survival of the boxed set. With 77 songs, detailed in a richly illustrated 104-page booklet/oral history, it traces the genesis of one of pop’s most dazzling savants, Sylvester Stewart, from his days as a Bay Area DJ trying to break into the Top 40, to his formulation of a race- and gender-blending band that brewed R&B, pop, jazz, rock, even nursery rhymes into a funkadelic soul stew. – StarTribune

The new box set Higher! opens with five cuts from Stewart’s earliest days in 1964 recording for the Autumn label in San Francisco, and already, in the rocking novelty answer record “I Just Learned How To Swim,” you can hear the playfulness and exuberance that would be hallmarks of his spectacular run of hits that began with “Dance to the Music” in 1968. …Taking a closer look at his music now, one main characteristic leaps out of the speakers: joy. – Press-Telegram